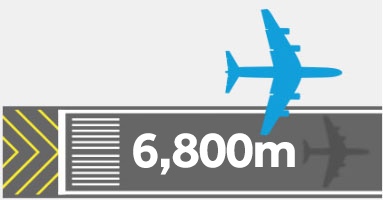 What is the Extended Northern Runway?

We propose to extend Heathrow’s existing northern runway to a total length of around 6,650 metres.

Extending the northern runway is:

Minimising the cost of airport expansion and protecting consumers is key.

Phased construction to allow emissions targets to be met

This is a safe solution for expansion: the safety zone between the runways is 650m, over twice the length required by international regulations.

Our extended runway can be completed before the 3rd runway. Less land is required minimising the impact on the local community. Generous compensation to those affected.

Heathrow Hub would avoid bringing any new communities into the overall noise footprint. Phased construction to allow for noise targets to be met.