If you’re a member of the press or media and require further information or supporting material, contact our PR Agency, Boscobel & Partners on the number below.

The cost of the initial phase, included in Heathrow’s current consultation, could be as much as £37.7 billion when it is supposedly completed in 2026.

Heathrow Airport and the Department for Transport both use the number £14 billion in describing the cost of the 3rd Runway plan, but this uses 2014 prices and assumes a pared down scheme with no new terminal capacity. Heathrow’s current consultation shows a completely different scheme.

As well as these changes, the reasons for the ballooning costs in the Heathrow Airport 3rd Runway scheme include the expense and complexity of building it on a raised viaduct over a diverted M25 right by the M4 junction – Heathrow Airport admitting in 2018, after six years of work, that its original idea of a tunnel was undeliverable – as well as inflation and increased land acquisition and relocation costs.

An analysis by Heathrow Hub has been submitted to the Civil Aviation Authority (CAA), demanding Heathrow Airport comes clean about its costs, which will be passed on to airlines and passengers via higher passenger charges.

A spokesman for the rival Heathrow Hub extended runway scheme, a first phase of which could be operational before the 3rd Runway for a cost of £4.7bn, said: “The idea the 3rd Runway will cost only £14 billion is hopelessly out of date and inaccurate. On a like-for-like basis we estimate it is nearly £38 billion.

“Heathrow Airport should come clean on the true costs of its complicated, environmentally damaging scheme and not be allowed to hide them any longer.

“The CAA should force it to produce an up-to-date detailed estimate and instead of giving conflicting signals about the 3rd Runway while fighting for it in the courts, the Prime Minister Boris Johnson and Secretary of State for Transport Grant Shapps should announce a proper review”.”

“Heathrow Airport seems to have joined the list of infrastructure providers who win approval by producing ludicrously low cost estimates which get revised up later. Given Heathrow’s high levels of debt, questions need answering on how the 3rd Runway is going to be paid for.”

British Airways owner IAG has already expressed concern over Heathrow’s costs after the CAA disclosed pre-planning application spending by the Airport has tripled to £2.9bn. IAG has said the 3rd Runway could cause passenger charges, which are already the highest in the world, to double to more than £40 each.

A summary of our detailed cost analysis for Heathrow Airport Ltd’s (HAL) scheme is below. 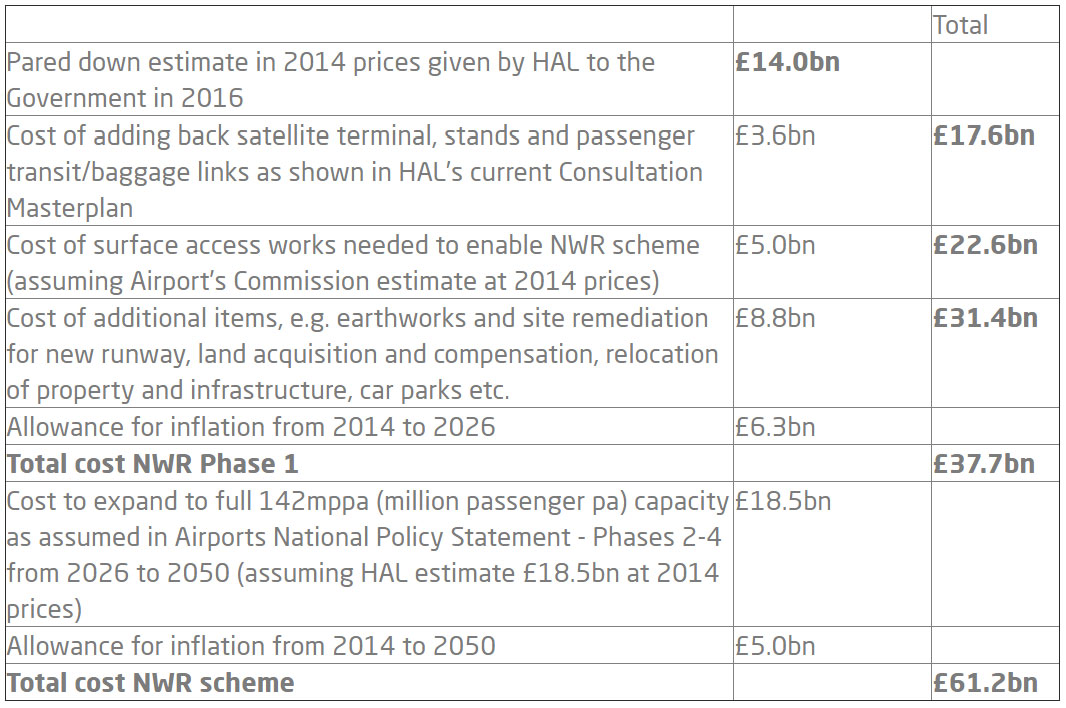 The CAA, which regulates Heathrow and enables it to pass costs onto airlines and passengers via higher passenger charges, is at last becoming concerned about the ballooning costs and has published a new consultation which would give it the power to restrict Heathrow’s dividends to shareholders unless it passes a new “financial resilience” test. A separate consultation proposes incorporating a new condition to “promote efficiency”. However, there is no explanation as to how such a condition could be retrospectively applied to the inherently inefficient NWR scheme, and the CAA has still not compelled Heathrow to publish an up to date cost estimate.

Heathrow Hub is currently in the process of appealing a decision by the High Court to refuse to quash the Airports National Policy Statement and the Court of Appeal hearing is scheduled for October.